By Geekvape
On February 15, Paris Saint-Germain defeated Real Madrid in the first leg of the Champions League at Parc des Princes. Mbappe's mercurial stoppage-time winner gave PSG a 1-0 win over Real Madrid.
PARIS, Feb. 18, 2022 /PRNewswire/ -- On the same day, GEEKVAPE held the 'SHAPE THE FUTURE' new product launch in Paris, France, officially launching three new Paris Saint-Germain Edition products. GEEKVAPE became the first brand in its industry to venture onto an international football field, capturing the attention of fans worldwide.
The partnership between Paris Saint-Germain and GEEKVAPE has been widely publicized since it was announced. These much-anticipated products have finally come to market. 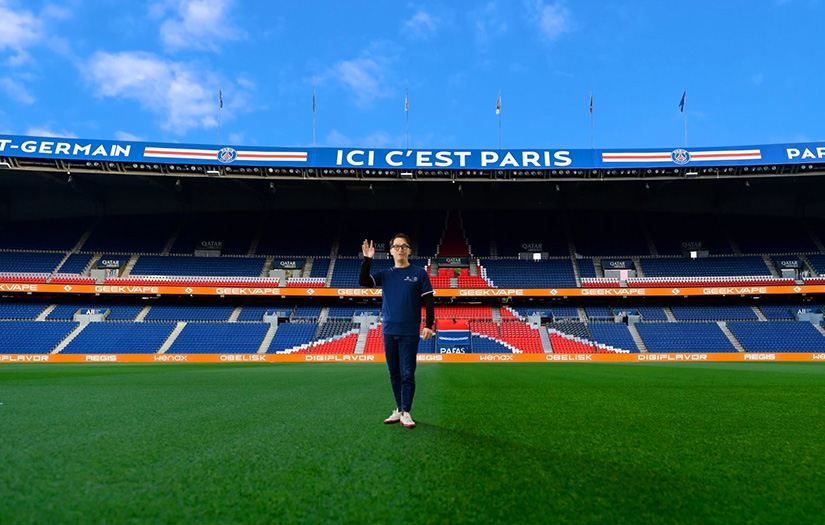 （Potti Lan,the marketing director of GEEKVAPE,spoke at the 'SHAPE THE FUTURE' Launch event）

GEEKVAPE has raised the bar for mod, pod mod, and pod product design. They are the Obelisk 65FC, which epitomizes the industry's cutting-edge technology, the Geekvape S100, which features a stainless steel body, and the Geekvape 1FC, the world's first fast charging pod mod. Each of the three products is painted in a French blue hue.
However, the rights and interests of the collaboration go beyond this. GEEKVAPE has a unique GeekFams VIP lounge in Parc des Princes, and their valued clients will be invited to enjoy a VIP viewing experience. GEEKVAPE will also distribute autographed PSG merchandises on occasion, and GeekFams will have the chance to become Geek Ambassadors and be invited to the stadium to meet the players up close and personal.
As we all know, the entire industry is struggling this year due to the influence of COVID-19. Despite numerous obstacles, the GEEKVAPE team has achieved outstanding results.
In 2021, GEEKVAPE continued to consolidate the position of the top one brand in BOX MOD, and its product system was more than that. This year, GEEKVAPE entered the pod and disposable market, realizing the full category layout of three categories and five series. They also gained industry media and partner recognition. GEEKVAPE received numerous international awards from the prestigious Vapouround Awards and Ecigclick Awards.
GEEKVAPE's global sales network now covers over 60 countries and regions and has maintained rapid growth for five consecutive years. More and more consumers are now turning to GEEKVAPE products, and its technologies are being adopted by an increasing number of partners. Launching co-branded products with PSG is a significant step toward reviving the industry.
For a long time, GEEKVAPE has been at the forefront of the industry, constantly striving to create better products for customers and pursuing the ultimate product and technology concept. This bold and innovative move increased the brand's global influence as well as its brand culture.
"By collaborating with Paris Saint-Germain, we are able to incorporate life and sports themes, resulting in a more diverse brand culture that inspires people." said Potti, GEEKVAPE's marketing director. GEEKVAPE is on the verge of breaking out on the global stage in the near future.